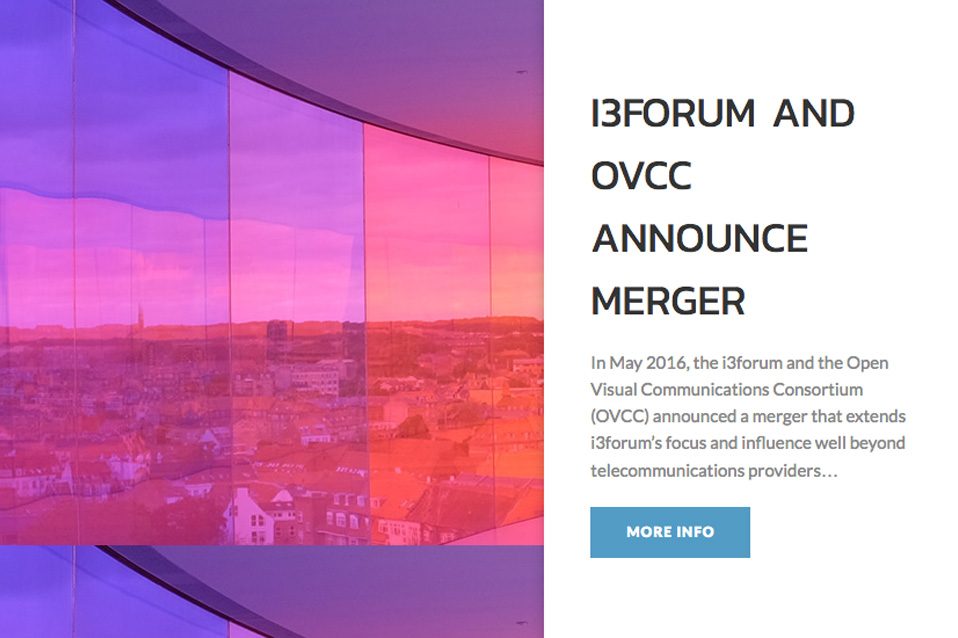 New organization announces incorporation along with scope and membership expansion

PARIS – May 3, 2016 – Leading technology consortia the i3forum and the Open Visual Communications Consortium (OVCC) today announced a merger that extends i3forum’s focus and influence well beyond telecommunications providers, to enterprises and the broad array of vendors, systems integrators and other organizations working to meet their visual communications needs. The new organization, which is incorporated as a not-for-profit in the United States, plans to increase the number of technology vendors counted among its currently predominantly carrier-focused membership.

i3forum, established in September 2007 to drive development of international IP interconnections among telecommunications providers and fight fraud, announced in February 2016 the expansion of its previous scope to include other advanced technologies such as IPX, IMS, NFV, APIs and IoT. Until now, OVCC has focused on the development of a global, standards-based visual communication network specification defining the technical and commercial terms required to implement a ubiquitous video service, supported across multiple carriers and equipment providers.

“The strategic expansion of the i3forum’s membership, goals and activities through its merger with OVCC enables it to address two of the most important areas for its telco members: the effective transformation of their own networks and the associated service development and delivery capabilities; and successfully supporting the ever-growing demands of the enterprises that use their networks to consume advanced services like visual communications,” said Catherine Haslam, senior analyst for Wholesale Telecoms at Ovum. “Expanding the vendor component of i3forum’s membership broadens the scope of the discussion, brings fresh new perspectives to the issues the forum is working to address, and enables the alignment of telco and vendor roadmaps.”

The OVCC is a group of global video exchange providers, network providers and equipment manufacturers that united to expand video communications and simplify video calls. OVCC members create multi-vendor, multi-network specifications offering a technical blueprint and business model to support the full spectrum of video systems, from immersive telepresence and room-based systems to high definition and standard definition, and from desktop clients to mobile devices. Its founding members include AT&T, BCS Global, BT, Orange and Polycom.

“With members from the world’s largest video providers, both OVCC and i3forum for years have independently promoted global network compatibilities, best practices, standards and innovation,” said Clive Sawkins, president of the OVCC. “As the communications industry continues to grow exponentially and globally, the merged organization will combine efforts and resources to help service providers, carriers and enterprises deploy and consume services safely across network boundaries, between public and private clouds, and over the public internet.”

The i3forum’s annual conference, held in conjunction with ITW in Chicago, attracts hundreds of participants from member and other organisations and has long been considered among the industry’s leading venues for discussion of topics such as IPX, VoLTE and virtual PoPs. This year’s conference will be expanded to cover visual communications.

“Bringing OVCC and i3forum together creates an organization with a broad scope and a unique ‘end-to-end’ capability that encompasses the underlying IPX network and services such as unified communication,” said Philippe Millet, i3forum president and vice president of partnerships at Orange. “It is the perfect response to the evolution of the industry, and will allow members and industry stakeholders to look more broadly at challenges and opportunities, foster new ecosystems and enable the transformation of the industry.”

About The i3forum
The i3forum is an organization of the international carrier ecosystem that brings together all stakeholders in order to help define best practices, promote and foster adoption of Industry transformation, and encourages innovation. The i3forum is a not-for-profit, membership funded forum. It is not a standardization body. It works closely with other Industry organizations, avoiding duplication of work and focusing on actionable practical recommendations and solutions for the Int’l Carriers industry. i3forum recommendations are made public when finalized. The i3forum values the diversity of its membership. It strives to take an unbiased, holistic approach – factoring in the multiple technical, operational, business angles from the perspective of the various types of stakeholders. For more information visit www.i3forum.org.

© 2021 i3forum | Shaping the future of international telecommunications sector. i3forum is NOT a standardization body and makes use of existing standards. i3 is working with other industry bodies (e.g. GSMA, WBA) and operates in the best interest of the International Telecoms industry.

Your ticket for the: i3forum and OVCC Merge to Extend and Integrate Best Practices for Telco Transformation and Video Communications